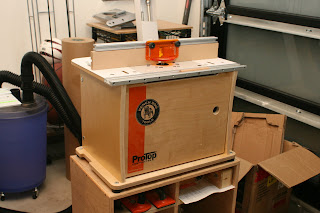 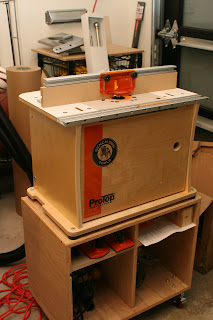 After using a lot of make shift router tables to build my shoe cabinet, I decided to buy a router table. Router tables are very versatile and woodworkers often build their own (much like building a workbench is a rite of passage), but this time I decided that I'd rather just buy one and use my time on building other things instead. Instead of a full size router table, I went with a portable benchtop model because my space is limited so I went with the Benchdog contractor's table.

It wasn't difficult to setup and the table top and fence is pretty nice. It is a benchtop version so it has to sit on something or it is pretty low to the ground. Putting it on top of my workbench would make it too high to comfortably work with so I decided to build a mobile base for it which will also give me some extra storage for all my router related stuff while letting me move the table around the shop easily.

I used plywood that was left over from another, bought 3 inch casters and spent an afternoon working on it.  Compared to how long it took me to build the shoe cabinet, making this cabinet went lightning fast.  Having the router table to help create the dado and rabbits definitely made things go much faster.