I watched Jurassic World: Fallen Kingdom and the season 6 finale of Elementary on the same night.  I've generally liked the Jurassic movie franchise even though it deviated from the novel and I've been a fan of Elementary since it first aired.

Jurassic World is terrible.  Every character from the villains to the kids were just different degrees evil or narcissists.  Ironically, in the movie the "bad" guy asks the protagonists how are they different and in this movie it is actually very easy to feel that they aren't different from each other.  In this movie there are no real protagonist/hero.  I don't know whether it is because this is a bridge episode to the final installment of the trilogy, but the characters show little empathy to each other and just focus on their own individual views.

It's hard to cheer for characters who care so little for others and can so easily throw away their moral values.  From the "nerd" who can just suddenly decide it's okay to kill another person to a vet who find it cool to be rude and a bully everyone it is really hard to find a likable character in this movie. The writers seem to only have two views: either you're with the dinosaurs or you're with people.

The irony continues since the movie actually starts with Jeff Goldblum's Ian Malcolm character explaining that it's not so black-and-white, but the movie and every character in it immediately ignores him.  The movie makes zero attempt to show that it's not black-and-white.  It completely ignores it and just moves forward with everyone making decisions for their own benefit.

Ultimately, the movie tries to distract you with action and tries to get audiences to develop emotional attachment through nostagia and sadness by killing the likable dinosaurs from the original Jurassic Park.  This alone says a lot about the movie... it is terrible.

Similar to Fallen Kingdom, Elementary went out of its way to completely alienate one of its main characters in the season 6 finale, "Whatever Remains, However Improbable".  Elementary always pointed out the moral ambiguity of the decisions its character has to make, but it also dedicated time to show that such decisions were not taken lightly.  The show also emphasize loyalty and dedication to one another where family doesn't just mean related by blood.

In the season finale, some of the main characters from the show completely violates the tenants of the show.  From Watson's decision that would break apart her and Sherlock's partnership and then throwing it in Sherlock's face that if they were partners he should support her decision to Captain Grayson blaming Sherlock for all the bad things then throwing them under the bus, both took the easy path.

Only Sherlock and Marcus stayed true to their beliefs and recognized that the more difficult path was the right one and wasn't deterred from walking that path.  In their decisions, they came out being more noble in their characters which only made the contrast with Watson and Capt. Gregson's action more difficult to bear and accept.

The show seems like it'll be make numerous changes in season 7 especially as season 6 didn't end with any type of cliff hanger to tie the seasons together.  I hope, though, that it doesn't just abandon the fractured relationship from season 6 as fans have invested 6 years into these characters' relationship.  Although Elementary is a crime drama, the show is ultimately a show about relationship between people and the impact that one person can have on another.  It would be a shame if they just threw this all away so easily.
No comments:

I previously wrote about my first impressions of the Nomatic Travel Pack and now I've had a chance to use it on a trip so here are my thoughts. 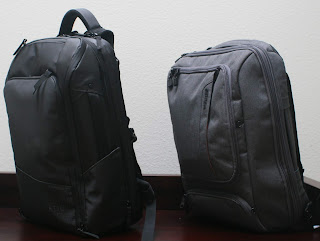 In its non-expanded form, the Travel Pack external dimensions doesn't feel that much bigger then my everyday carry backpack.  It held everything that I normally bring along when traveling with little effect on the shape of the backpack.  It easily can fit under the seat on an airplane and it stayed upright without problems. 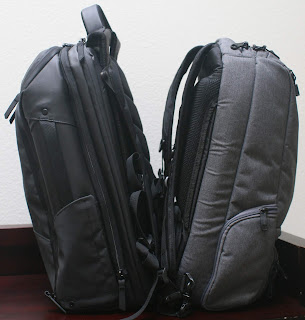 Access to the main compartments were good and accommodating since it provide access from either side and the top.

There are plenty of organizational pockets, pouches and compartments so everything had a place and stayed in place. 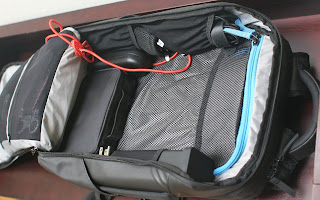 It was comfortable to carry even when full.  For this trip, I didn't use the waist straps.

The ability to open up the laptop compartment is meant for the convenience of going through TSA checkpoints faster without having to take out the laptop, but that only works because TSA wants to see the laptop unobstructed.  Having the tablet pocket on the side as the laptop meant that TSA will likely ask you to take one of them out so it kind of defeats the purpose.  If it is on the opposite side of the compartment like how the Atlas Everki has it then it will be more convenient.

The quick access pocket at the top is not very big and I found it to be a tight fit for my phone.  I really can't put much in there if I want the phone to be there.  Normally I'd like to stick my phone there when I go through airport security rather then leaving it in the bin where I might forget or make it easier for someone to snatch.

The water bottle holders were a tight squeeze especially if there are bulky items in the inner side pockets.  It does stretch so it does fit a typical water bottle but it's not easy to drop-in.  For me it was a two-handed operation.  I definitely missed the Everki in this area.

The hidden security pocket along the back of the backpack was also very tight.  It's good for paper money and other thin items but when I put in my wallet, I found it slightly cumbersome to fetch it back out.

The Travel Pack can hook onto your rolling luggage but it goes on sideways.  I'm not used to accessing items from the side but for the main compartment  it's fine.  For the quick access pocket and front compartment, it feels more awkward and I worried that something might fall out when I open the zipper.

The outside material feels more plastic-like then what I'm used to.

Overall, the Travel Pack performed as advertised.  When I first packed it and when through the security checkout, I wasn't as happy with it but it grew on me as I traveled.  I had to adjust a bit with how I organize and access items.  I would probably sacrifice a bit of form for function such as the bottle holder pocket from the Everki (see comparison between the Everki and TLS here), a bigger quick access pocket and being able to hook to luggage up-right instead of sideways.

I'm not a 1-bag traveler where I would just use one bag to store everything so I don't expect to use it in expanded form much, but even in its normal form there was plenty of space for additional stuff in the main compartment that I didn't use on this trip.
No comments: