My "workshop" is, like many people, in the garage and one stipulation from She Who Must Be Obeyed for letting me indulge in my hobby is that the garage must still be able to function for its intended purpose for at least one car.  That means being able to move stuff around and out of the way.   While the MFT/3 is not super heavy, it doesn't motivate me to want to me to move it.  Besides moving the table itself there is the vac and other pieces of equipment that needs to be moved as well.  I decided that what I need is a mobile cart with storage that will keep everything together and I just need to roll one thing around.

The result is this mobile storage cart for my MFT3: 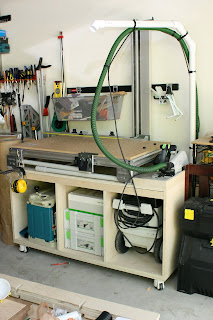 I got a lot of the inspiration from others especially those who posted on the Festool Owners Group.  I added a boom arm to hold up the vacuum hose and power cord so they stay out of the way when I'm cutting.  There are 3 compartments for storing things in the front and a small storage place in the back as well.  The caster are machine leveling casters from WoodRiver which keeps it stable and stationary when, but when I want to move it I can lower the wheel.

Finding a place to keep the saw between cuts has always been a pain so I decided to have  space next to the table to put it down.  I put in some sides to prevent it from accidentally falling off. 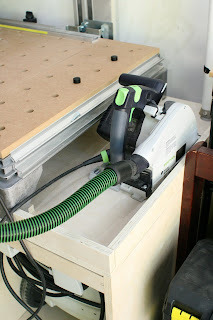 I haven't done too much since building the cart, but I have some projects in mind if only I can find the time... :-)
8 comments:

The trend at our house has been to move away from having large desktop machines to smaller specialized devices (e.g. having a NAS instead of a server with big drives).  My wife's primary machine, which she used mostly as a desktop replacement, was an older Thinkpad x300 that started to show its age especially when it came to watching HD videos.  I decided to upgrade her machine but it must meet her criteria that it be small enough to fit into her desk drawer (don't want clutter) and at the same time powerful enough to run her apps (including Photoshop, Picasa, etc.), and watch videos. It also needs to be able to access all the various peripherals such as the printers and scanners that we currently have.

For portability we already have the Android tablet and a Google Chromebook (CR48) so portability was not as crucial as when we bought the Thinkpad.  At that time, mini PCs were non-existent or a joke of a machine.  Now, there are small powerful options that can do everything short of playing super high-end games.  My first thought was get a Chromebox.  I really like the ease and convenience of ChromeOS.  It's small, fast and does the majority of the things that people use their computers for these days (browsing the web and using web applications).  Another benefit is that it really have zero to low maintenance.  However, the one shortcoming of the Chromebox is its peripheral support.  I don't think it's able to use my network printer and scanner directly so I reluctantly gave up on the little beauty.

The next obvious option is the mac mini, but after mulling it over it feels underpowered for the price.  The starting price is not too bad, but the memory upgrade is expensive, there is no optical drive and I've been disappointed with Lion and Mountain Lion.  I also worry about the direction that Apple is going which seem to be to put a lot of restrictions on a general purpose PC to make it not general purpose.

After searching around for the mini-desktop PC, I finally decided to buy the Shuttle XH61 barebones system and put together a machine myself.  Along with the kit, I had to buy a CPU (Intel Core i7 2600S), memory (8GB), bluetooth adaptor, solid state drive and an optical drive.  The i7 comes with an integrated GPU so I don't need to buy a separate video card unless I plan to do highend gaming, but this is not the rig for that.  For the OS, I ended up going with Windows 7 instead of Linux simply for the ease of running my wife's apps.

Putting the system together was surprising easy.  Putting all the components (CPU, memory and SSD) in took about 30 minutes and it had no problems recognizing the external USB DVD drive on boot-up.  The machine is super quiet and the i7 is a speedy little sucker.  Installing Windows 7 was fast on the SSD, memory and network so her new machine was up in less then an hour.

Some shortcomings of the system include it doesn't come with any video cables for this video output (VGA or HDMI).  It doesn't have DVI (just analog VGA and HDMI), but fortunately I had a spare HDMI cable lying around.  It doesn't come with  bluetooth (needed for keyboard) or WIFI support (does have gigabit ethernet which is what I'll be using anyway).

All-in-all, it is a fine little system that runs super quiet and makes my wife happy.