End of Week 13: Delayed by the Roof

Work this week was blocked by the delay in the roof trusses arriving. It's scheduled for Monday, but until then nothing can be done. Hopefully the trusses will go up quickly and we can make up some time. We still need to finalize a few details on colors and I need to get the home network planned out to order all the cabling.
No comments:

This end of the week brought rain so I didn't take any pictures. We're still waiting for the roof trusses to arrive, so the major work completed with the installation of the new few fence along with some of the plywood sheath walls.
No comments:

End of Week 11: Waiting for Trusses

It was hard to capture in pictures what was done this week which was more details in the framing. The garage, for example, got the parameter support beams and the interior walls were put in. However, the delay came from the trusses which is taking long to arrive so we'll have to work on other parts such as the fence while we wait on those. 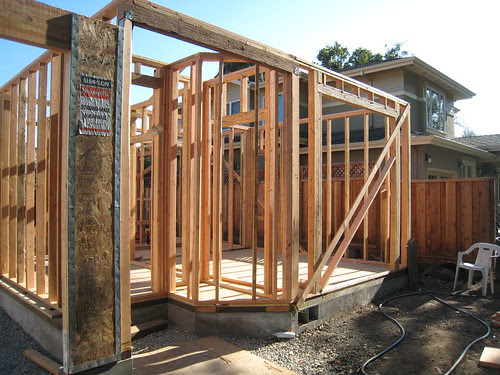 I'm still eyeing the Festool TS55 plunge circular saw, but $500 is nothing to sneeze at so I'm not rushing into it. I do need something so I can at least do some basic cuts myself so I decided to buy a Ryoba-type saw. Japanese saws are different from their western counterparts in that they cut on the pull action which is said to make cleaner cuts and easier. Although this is still in dispute, the thinness of the blade definitely isn't.

I decided to get a Ryoba saw because it has teeth on both sides with one size for rip cuts and one side for cross cuts. When I did my first cut with this saw I was I shocked as how easily it went through the wood. Cutting oak took almost nothing as the saw just went right though it! 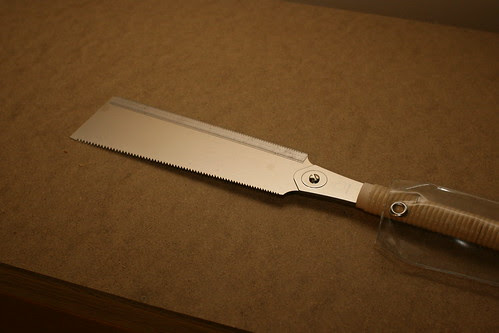 For $30 plus a $7 cutting jig, I'm now able to make straight or miter cuts that are finish quality (no circular cut lines from a power saw that requires sanding to smooth out).
No comments:

Continuing the evolution of my workbench, I drilled 3/4" bench dog holes aligned to the bench dog that is built into the vise. To drill the holes, I used a forstner bit on my power drill but did not drill all the way through the table. It's common to drill all the way through so dust, wood, etc. don't accumulate on the bottom of the hole requiring annoying clean ups, but that means the bench dogs would need something that prevents them from falling through the holes. What I did was to drill a smaller hole at the bottom that does go all the way through so that things can fall through but the dogs are still held up. 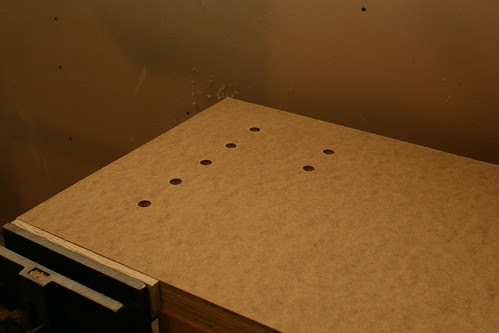 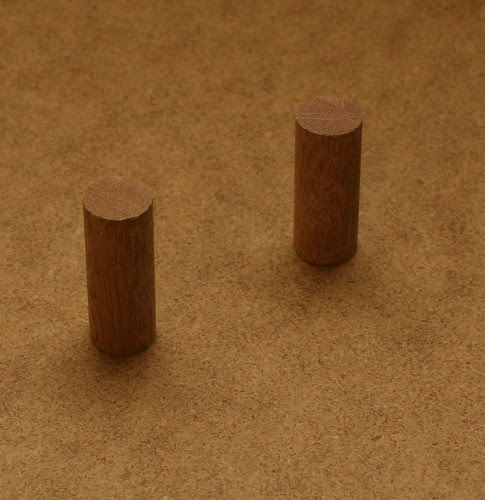 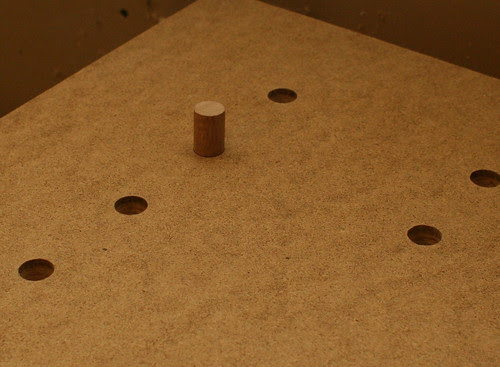 Finally, I drilled two holes through a board that I can use with the dogs as stops in two directions. 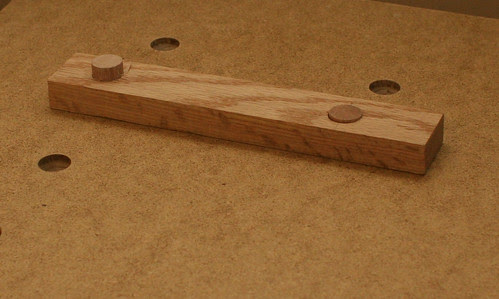 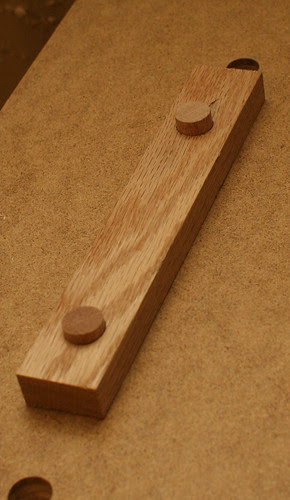 Showing how I can use the bench dog with the vise to hold the wood in place: 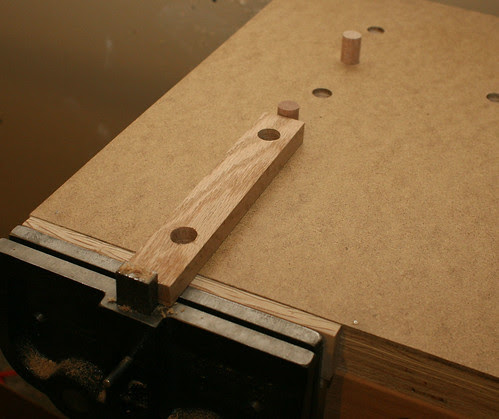 Week 10 was focused on getting the wall frames up and a lot of progress was made. 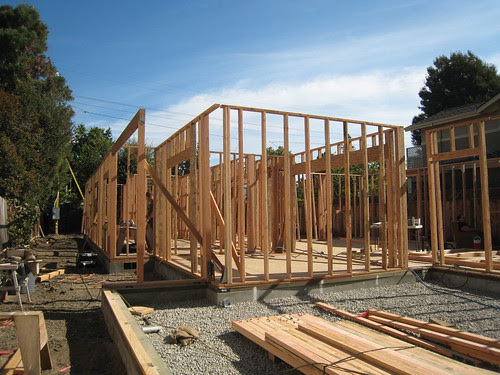 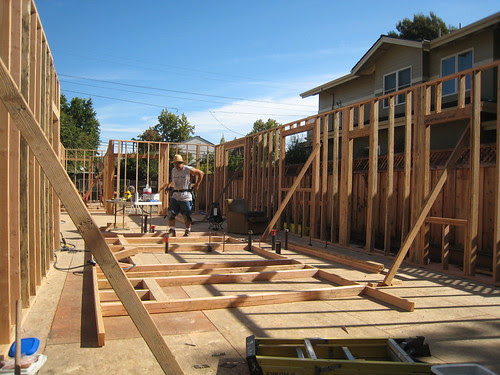 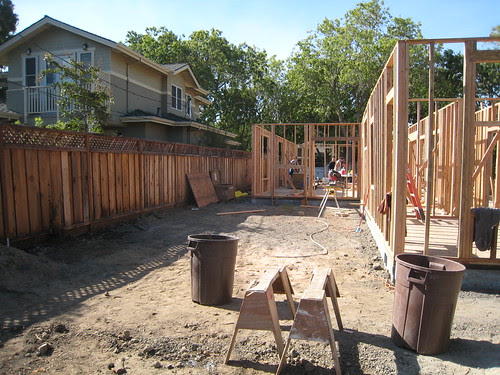 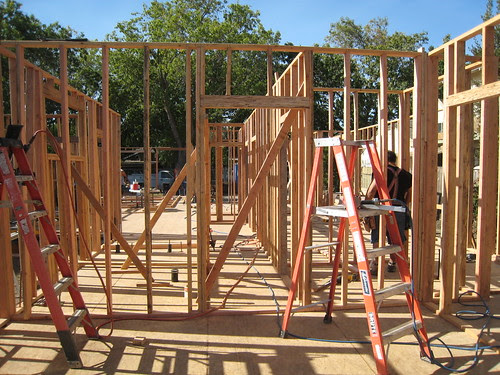 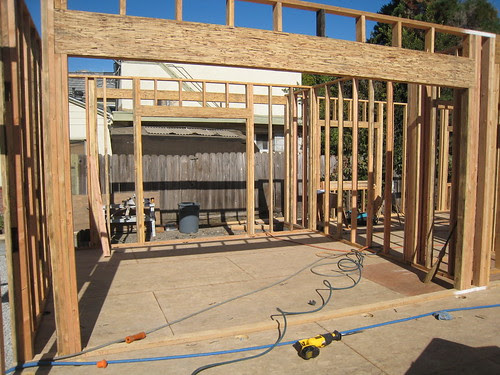 With the skylight situation resolved, the project is back on pace with the wall framing going up.

Seeing from one end of the house all the way through to the other end: 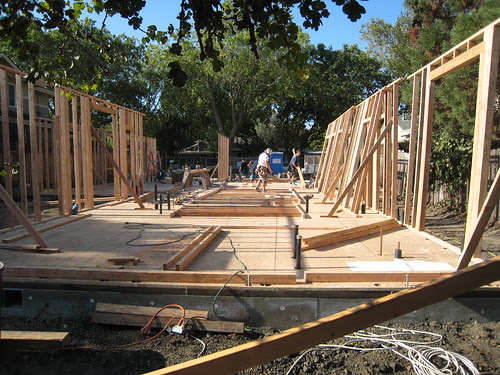 The garage also got filled with gravel: 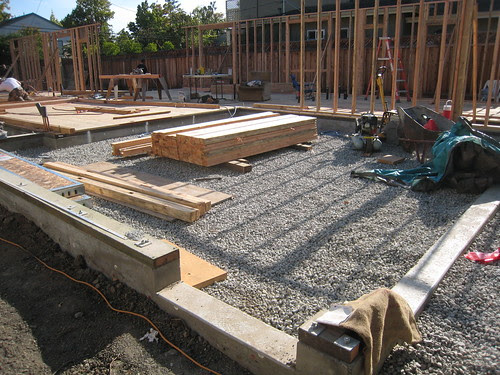 I finally got around to installing a wood working vise on my workbench. I had already planned for a vise for the bench when I first made it, but I needed K's help to get it mounted on the table top since it was so heavy. I actually took off the top and flipped over in order to install it and then needed K to help me put the top back into place..

The vise is a Jorgensen 41012 Woodworking Vise which was bigger then I expected but fortunately fit perfectly in the 10" overhang that I had on the bench. My table top was exactly 1/2" short of the minimal thickness needed so I had to use a 1/2" plywood scrap underneath the top for the vise to mount against. Since I don't have a saw, I had to ask my friend, KH, at work to cut the pieces to size which I then sanded a little to get everything flushed. Installing the vise isn't difficult but the provided template to help cut the holes were actually a little bit off so we had to make some adjustments while we were mounting it. 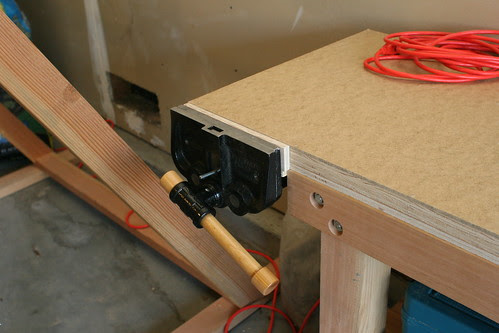 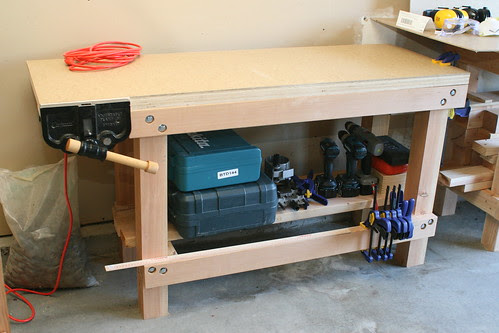 There are three things left that I'd like to do to the bench: 1) install bench dog holes, 2) put a couple of wood blocks in the jaws of the vise and 2) apply a finish to the frame.
5 comments:

End of Week 9: Another Delay By the City.

The most common questions that people ask me about building the house are how long it will takes and whether the winter raining season will cause any delays. It's natural to think that nature or unexpected difficulties in construction might be the main causes of delays, but two months into the project the real cause of delays is the local government. Any problems that might arise from the actual construction of the building can be solved by an experienced builder quickly, but he can't solve city hall.

This was one those weeks where the crew had to work on some other things instead of the scheduled the wall and roof. The city decided that my sky lights (newer and likely more efficient but not "certified" yet) isn't more efficient so in issuing the papers they changed our plans to a sky light that 1) doesn't fit my roof, 2) is darker so lets less light through, 3) less efficient and 4) doesn't spread the light around the room. Basically, they wanted me to install a sky light that doesn't let in much light. What's the point of a sky light if it doesn't let in light?

This also impacts some other things that the city requires which could mean that I have to install things that the house don't need to get some the points needed for the house. The irony is that these requirements is to make people build greener and more energy efficient houses but the result is that I might have to pay more and install less green and less energy efficient sky lights.

The city is preaching to the choir here about installing more money saving items. Hey, I'd love to install the things that makes the house better, more energy efficient and better for the world. So why does the city make me install more expensive, less energy efficient and possibly have a higher carbon footprint in order to do that. Does that make any sense?!?

Fortunately, it looks like my GC and Architect is dealing with it and will be able to come up with some good solutions.

Standing on the base floor of the house: 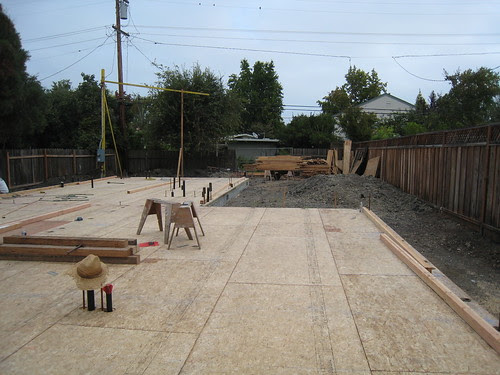 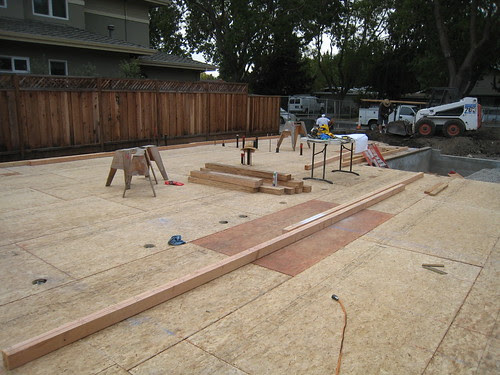