When I opened up the box with the Asus PN50 my first thought was "wow, it is small."  I also had an Asus Vivo Mini which was also small, but the PN50 is even smaller and significantly more powerful.  The size is all the more noticeable when placed next to the Shuttle XH61 that it replaces.  The XH61 was already small enough to put into a drawer.  We're talking near Raspberry Pi level in size (although it is significantly more expensive) and it is amazing how much power is contained in this little box.

Specifications for this system:
Opening up the case is straight forward.  Remove 4 screws on the bottom and slide the bottom plate in the direction of the arrow that is printed on it.  Immediately the memory and m.2 slots are visible and accessible.  Install them, close it back up and we're in business!
Everything booted up immediately and there were no issues with the Windows 10 install.  There were no driver complaints and the setup process went smoothly.  After Windows pulled the latest updates and rebooted, it took so long that I worried that it froze.  Eventually, it did whatever it is that it needed to do and restarted.  Everything came up, but since I used the Windows that was pre-loaded on the SSD, I had to go through and remove the unwanted software that it came with.  I added a 2.5" SSD as well and there was no problems recognizing it.
I installed Genshin Impact and played at both medium and high graphics quality and didn't see any issues with either.  Genshin Impact is not the standard to measure a system's gaming ability but if hardcore players aren't going to get a mini PC like this.  What this shows is that the 4500U is capable of running a current game in case there is a time when I wanted to play something on the PC.
Throughout the whole time, the unit stayed very quiet.  It is not completely silent but also not very noticeable.
The unit does come with WIFI and bluetooth and I was able to pair a PS4 Dual Shock controller easily and used it to play Genshin Impact. 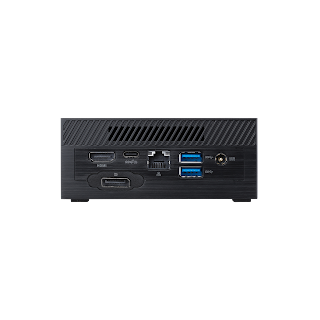 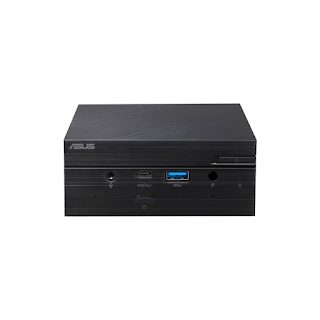 There are two USB 3.2 Gen 1 Type A ports on the rear and one on the front.  There is also a USB 3.2 Gen2 Type C on the front and back.  Both support DisplayPort but the front on also support battery charging.  3 USB-A ports is a bit lacking so I connected a hub to one of the ports.  In total there are 5 USB ports and two of them can be used for connecting to DisplayPort monitors.
Along with the DisplayPort on the back and HDMI port, up two 4 monitors can be connected at once.  I normally run a two monitor configuration so this is plenty for my use.
The front also SD card reader.  The audio-out jack is also on the front and the ethernet port is on the back.  I wished there was a second ethernet port and an audio jack on the back or side in addition to the front.  This would give some additional options to the orientation of the unit especially when it is mounted on the back of the monitor.  The Vivo Mini had this and it was a nice feature for the usb and mini
It is targeted for mobile but useful in a mini pc like the PN50 in keeping the heat down.   Benchmarks can be studied all day long but ultimately it'll be actual usage that matters.  If I don't post anything else about the performance of the 4500U it is probably because I'm finding the performance to have nothing to complain about!
No comments:

The Asus PN50 series of computers are based on AMD's Renoir APUs based on their Zen 2 architecture and combines the CPU with integrate graphics.  The PN50 are mini computers that fits in the palm of your hands and utilizes the mobile versions of the APU (4300U, 4500U, 4700U and 4800U).  Note that these are generally bare bones systems which means that it doesn't come with memory or storage.  There are now enough info around the web and on Youtube talking about these APUs and also specifically about the PN50, but I had questions about these systems that none of the articles or videos talked about 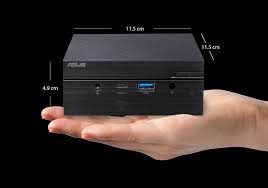 I recently bought the 4800U and 4500U versions to replace my wife's desktop and my personal desktops of the past 7+ years and I want to answer the questions I had in case others also had the same questions.
Q:  Does the configurable port on the back mean that I can change it to what I want (VGA, HDMI, DisplayPort, Ethernet)?
A:  No, they are fixed.  You need to find the exact model you want with the type of port you want and some not available in some region.  I really wanted one with an extra Ethernet port but no seller in the US listed it.  The most common in the US has a DisplayPort.
Q:  Asus offers one version (4800U w/ 16GB memory, 500GB SSD and Windows 10 Pro) that isn't a bare bones system but it doesn't say what the components are. 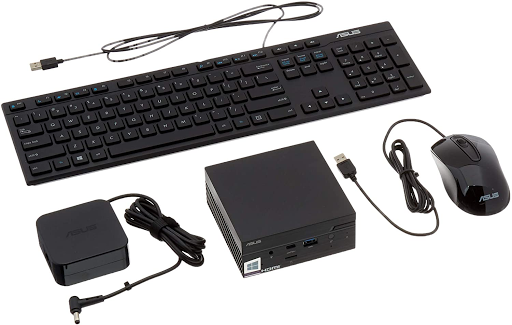 A: Here is what is in this system:
The keyboard and mouse are pretty cheap quality feeling.
Q: Can it be used for playing games?
A:  Maybe not for hard core gamers or people wanting to play Cyberpunk and high graphics settings, but the 4500U works very well for playing games like Genshin Impact out-of-the-box and the default game settings.
The systems I got was the bare bones 4500U version and the non-bare bones 4800U.  I transferred the memory and SSD from the 4800U to the 4500U since I wanted 32GB of memory instead and a bigger drive.
The new configuration for the 4800U is:
The main feature that I sacrificed was the second ethernet drive that my current Shuttle PC has.  The PN50 also has fewer USB ports but does have a USB Type C port that is capable of DisplayPort.  I thought about just building a desktop with the Ryzen desktop CPUs or APUs when they become available, but I think that I will miss the small form factor which has help me avoid the temptation of wanting to upgrade because it sits out-of-sight.  :-)
I believe that running with the base clock of 1.8GHz is fine and it is when I compile stuff that I really need more speed and power over my existing system.  Compiling C/C++ code are really the only times that I might think about getting a new computer.  Occasionally, I might wonder if I can play a game but since I moved over to console gaming (to avoid the constant upgrade cycle), but generally even my 7+ years old machine have remained speedy.
This is really more a splurge buy for myself because of the holidays and that my wife wanted to co-op Genshin Impact on something other then her mobile phone.
There are some competitors to the PN50 including the Asrock 4x4 Box series which are just as small and comes with dual lan interfaces.  However, they are completely sold out everywhere.  I've previously owned the Asus Vivo Mini and was very happy with it for both its quality and how quiet it is so I've been partial to the PN50 when it was first announced.
No comments: