Hard to believe that we're down to our final month, but the final inspection is right around the corners. This past two weeks saw the completion of the hardwood floors, the installation of the cabinets and kitchen island and the arrival of the garage doors and appliances. In addition, the water heater and driveway started to go in. It's so close that I'm starting to taste it!

The weather has put a slight damper on things which meant that we haven't been able to finalize the exterior colors. We know what we want, but have not been able to see a sample since the wet weather has kept them from putting up a sample. We hit one snag with the pavers we picked for the driveway which got discontinued so it's back to finding another set of pavers. 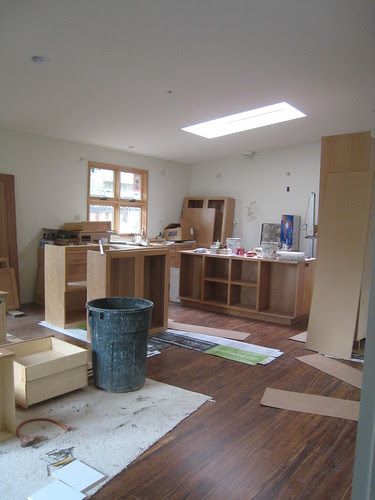 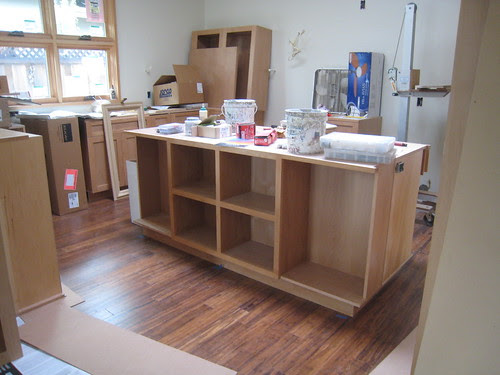 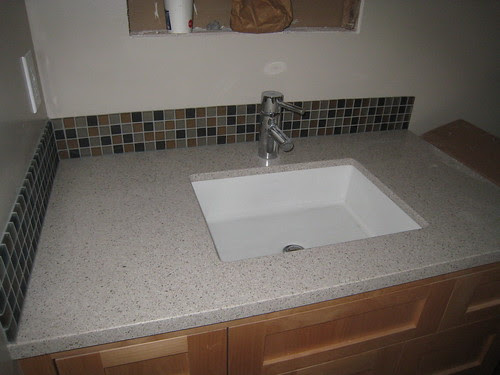 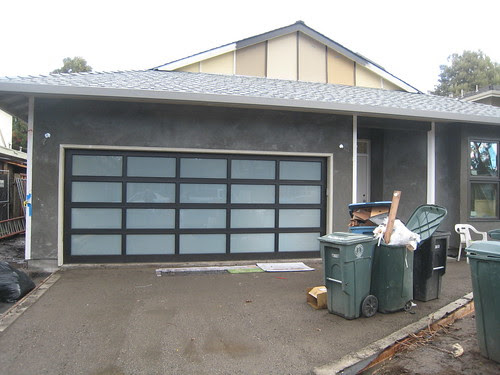 The Festool Domino might be Festool’s most controversial tools. Festool is known for its high quality products and the high price to match, but at $800 the Domino makes everyone raise an eyebrow. For some, the Domino is a glorified biscuit joiner, for others it is just a hand-held mortise maker and some might even consider it to be a extreme dowel tool. They are all right, of course, but it’s better to look at the Domino as a whole system including the Domino tenons.

The Domino can be used where you’d use a biscuit joiner, but provide greater strength. It can make mortises, but it does it in the palm of your hand. It can be used in place of dowels but with the added benefit of not twisting. That already is like having 3 tools in one! When you throw in the Domino tenons there is even greater time savings not having to make your own tenons.

The Domino is well built and feels solid in your hand and I especially like how it is designed so that you can use it with markings instead of measuring. For example, putting a mortise in the middle of a ¾” piece is a matter of just letting the fence rest on the face of the board or using the stops that are already on the tool. Even the accessories allows you to place your mortises where you want them without heavy measuring. I’ve used the Domino from building cabinet doors to simple through slots for holding my chisels and it is easy, quick and accurate.

As good as the Domino is, there are still some small things that I’d like to change. Attaching the dust collector hose can be a pain sometimes. The depth of the mortises is limited pretty much for the tenons so it’s not as general as a mortising machine. The switch to set the mortise width should only be used when the tool is running so why doesn’t it lock when it isn’t on?

Is the Domino worth it? I would recommend it especially if you don’t have biscuit joiner, mortiser, or doweling jig since the price of buying the 3 tools starts to put it close to the Domino. If time is a premium then this makes it worth it too. I was able to build two cabinet doors in 30 minutes (my very first) compared to how long it would’ve taken me to do it otherwise.

For the new house, we needed a shoe cabinet so I decided to try my hands at building a simple one. It is made of walnut plywood (3/4" for the carcass and shelves, 1/2" for the door panels, 1/4" for the back) with 3/4" thick and 2" wide solid walnut trim. The carcass uses standard dado and rabbet joints, but for the doors I used loose tenons. The top of the cabinet is so that we can put our phones, key, etc. once I put in a small hole for the charger cables to go through. 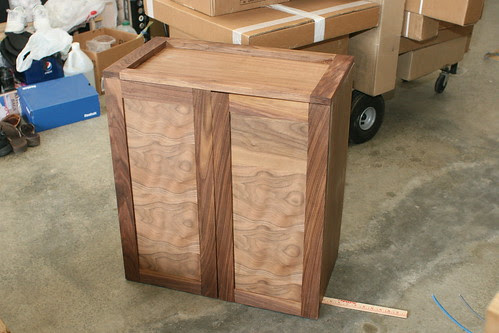 It was a good learning experience and overall turned out better then I expected. There are definitely things I want to do better on my next cabinet, but fortunately most of the mistakes on this one isn't visible. Building this cabinet wasn't cheap since the raw materials (solid walnut, walnut ply) are quite expensive (3/4" ply is easily over $100), but for the next cabinet I will have plenty of stock remaining so that will be the savings. If you just needed a single cabinet it's definitely cheaper to just buy one. I also bought the wood that already been smoothed which is very expensive compared to buying rough lumber and planning it yourself. However, I didn't have access to a planner and wasn't ready to buy one.

To cover the plywood edge of the shelves, I went with unfinished edge banding that already have the adhesive on it so I didn't have to iron it on. The solid wood hides the rest of the plywood sides. Finally, I used a poly gel for the finish as I'm not ready yet to use "real" finishes such as shellac.

For the hinges, I went with an European style hinge so that it doesn't show. 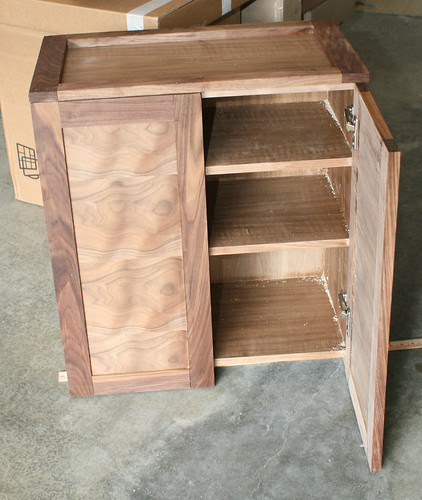 SWMBO wanted me to build a shoe cabinet which required making dados and rabbets. I had made some with my router previously for the tool tote using makeshift straight-edges, but they weren't very clean so this time I wanted something more precise. Plywood comes in standard thicknesses except they don't really measure up to those thicknesses. 3/4" plywood is not exactly 3/4" and so your 3/4" router bit will make dado too big or too small. I decided that for this project, I will make a jig for making more precise dados.

After looking around the web, I went with the free plan available from WoodSmithShop.com. There are a lot of plans for adjustable dado jigs and they mostly follow the same concept just using different materials and techniques to reach the same result. In fact, right after I completed my dado jig, TheWoodWhisperer released a video how-to on how to make a very similar jig. Why didn't he release it two weeks earlier!?! ^_^. I watched the video and it is nice, but I actually think the method described by the WoodSmithShop is easier to construct and true-up. 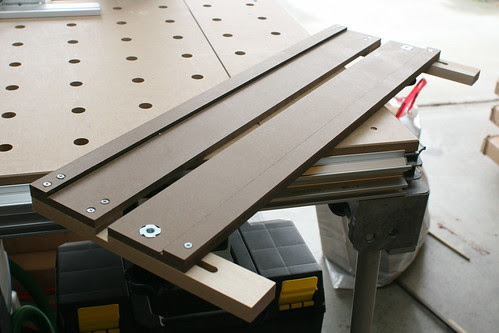 In building this jig, I learned a lot about hardboard. One, hardboard have many different names which is confusing. Some places call them masonite, some call them duron, and some call them hardboard. Most big chain hardware stores only carry "peg boards" which are hardboard that is smooth on one side with holes and is often used to hang tools, etc. For hardboard that is smooth on both sides, it is called tempered or serviced tempered but sometimes they go by different name. To find these, you'll likely have to go to a lumberyard rather then a hardware store.

I had a hardtime finding the T-nut and knobs at the hardware store too and had to go to a woodworking shop instead so if you can't find one at your local store then try Woodcraft, Rockler or Amazon.

Making the jig is very easy and the plans are very detailed. I messed up the first one because I used the wrong side of my router base, but having made one already the second one took me only an afternoon. I cut the slots using plunge router and straight edge. It's not as clean as using an router table like what was shown in the TheWoodWhisper but I dont' have a router table, so... 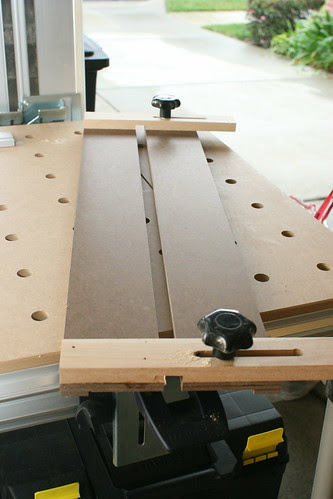 Plywood is a very useful material for building stuff, but at 8' x 4' (or 5' x 5') for full sheets they can be very difficult to carry by yourself. I'm not a very big guy and I have a hard time trying to span my arms across the width of the board in order to haul it. I recently felt the pain (literally) when I brought home 5 sheets of 3/4" ply using a rented truck. Sliding the sheets off the truck was easy but moving them into the garage and to where I can hold them was tiring, frustrating and left my arms feeling sore the next day.

I then came across a product call Gorilla Gripper which is a handle like device with a clamp that you clip on top of the plywood. It's a pretty simple device and I wondered if it really work as well as advertised, but if it can allow me to carry the plywood myself without the pain I endure using my bare hands then I'm all for it.

The device is very well constructed and feels hefty and solid. The handle has a foam cushion and is thick so as not to dig into your hand. Unlike other ply handles that you put under the sheet and lift (thus requiring that you can reach across the width), Gorilla Gripper grips the sheet from the top. You simply put it on the plywood so that as you push up the clamp exerts more force to grip the ply tightly.

It just so happened that I got it just before I brought home another couple of sheets of ply and so it was time to test to see how well it work. Well, I have to say that I'm darn impressed. It worked as well and as easily as it advertised. Once I took the sheet off the truck and put the gripper half way along the length, I was able to simply lift the sheet and walk it right to where I wanted to put it. Took me 30 seconds as opposed to 5 minutes trying to drag the sheet over. It's important to put the grip half way to ensure balance weight distribution and remember to lift with your legs and not just your arms to protect your back.

It's an excellent product and highly recommended if you find yourself having to carry sheets of plywood yourself.
No comments:

It's starting to feel like it's coming down to the final stretch as it's been installing, installing and installing rather then building.

With the bathroom cabinets in the focus shifts to the kitchen. The flooring is about 40% installed and now some work is starting on the exterior with tearing out the old drive way to make way for the new. 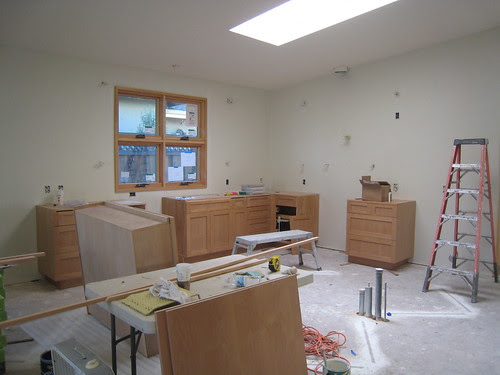 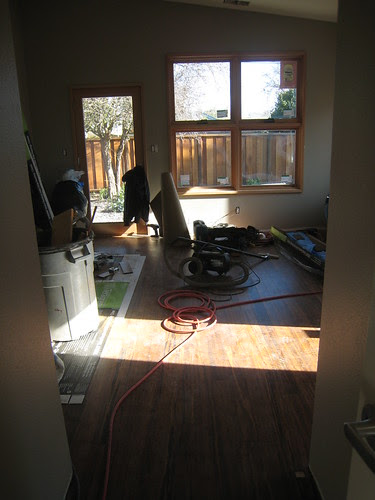 One of the bathroom countertop installed: 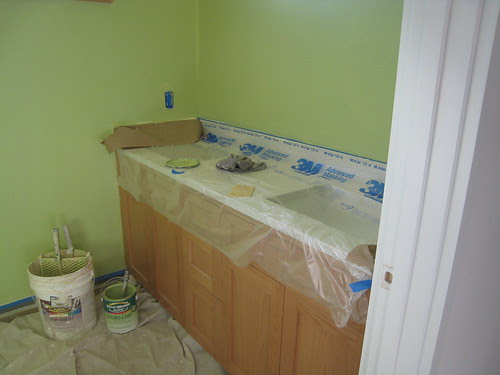 Lots of rebar in the old drive way: 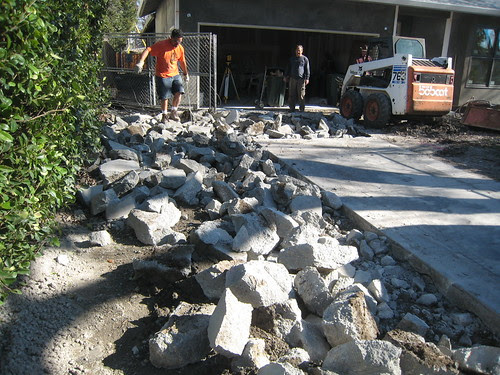 The Cost of Woodworking Part 2

With some more experience with woodworking, I wanted to update my thoughts on the cost of this hobby. I mentioned earlier that the starting cost of woodworking didn't feel that different from many other hobbies such as photography and computers. However, there is one difference in that woodworking requires raw materials where as computers materials are mental and virtual and photo has also moved towards binary bits instead of physical material. In this regard, woodworking is definitely a lot more expensive.

In looking at various guides on buying tools, table saws, routers, sanders, etc. are often mentioned first, but if you're planning to do more then a few projects with solid wood, I believe that a planer is super important. The cost of buying pre-planned boards is just nuts. It can be 3-4 times more then buying the rough lumber. I
1 comment:

Electrician started to install the light fixtures, plumber the bathroom fixtures and the hardwood flooring started to go in. Tiles continue to make progress and given my growing interest in having a workshop in the garage it was awesome to see the garage concrete flooring poured! Smaller details such as the door knobs are also starting to get installed. 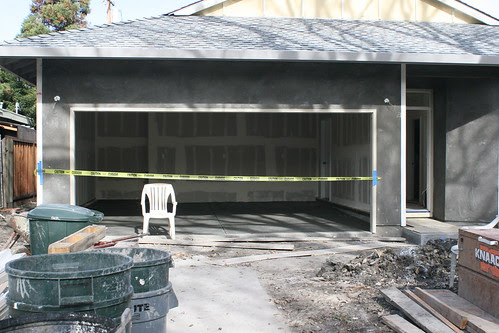 One of the lights: 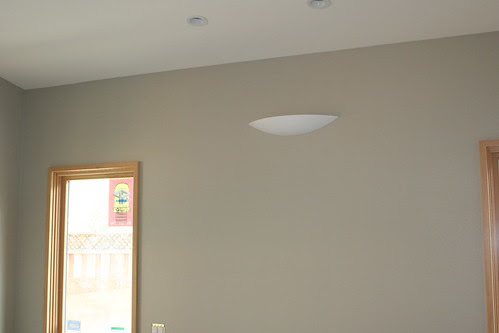 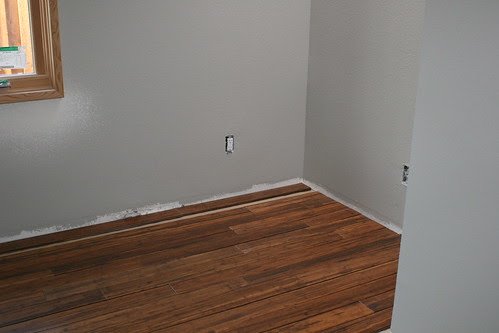 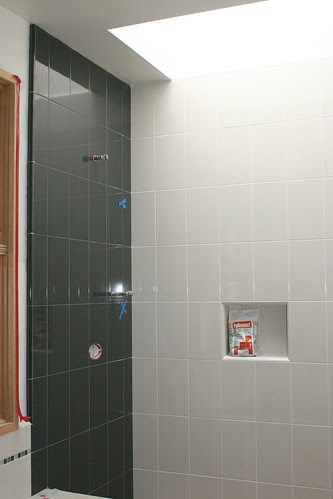 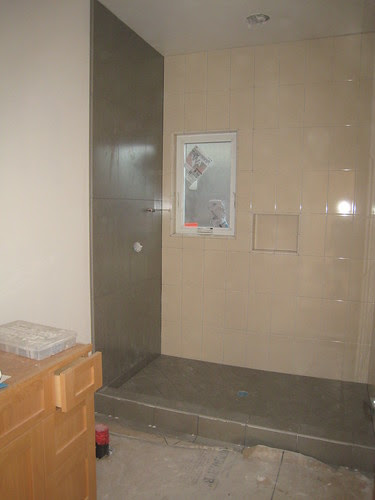 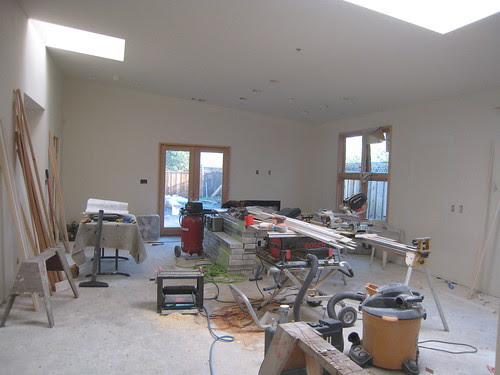 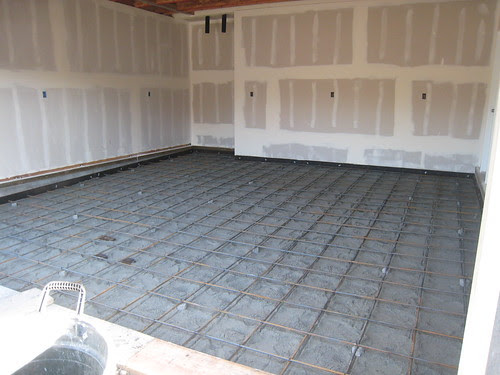