After reading about the Asus Vivo Mini UN62 from CES, I was very excited by the idea of a small (it fits into the palm of your hand) and nearly silent PC that had enough power to be an actual computer but with such low power usage that it can be kept running all the time if need be. 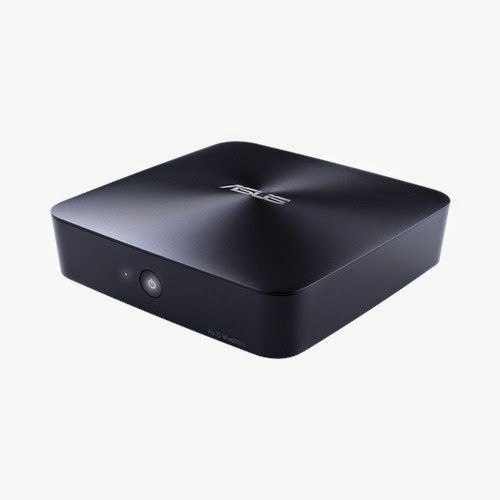 Note:  Don't just go out and buy any SDD.  This is a small machine and what you need to add in are the small components most often used in notebooks such as SODIMMs (memory) and mini pcie (wifi).

I bought the i3 version since I just needed it to do two primary things:  Minecraft and play videos from our NAS.  So far it hasn't disappointed!  Putting everything in all the components took about 10 minutes and I was able to boot off a USB DVD drive that had Fedora 21.  Everything worked immediately including WiFi and it is super quiet.

If it weren't for the small light on the power button I couldn't even tell it that was on since there was no noise.  This isn't a fan less system so there are fans but even when pushed it was still very quiet.

It comes with HDMI and display port output so I just plugged into the TV, told Linux to play sound through HDMI and pretty soon the family was playing Minecraft with sound and video.  The performance is very good and despite how everything fits into such a little box the temperature never felt hot to the touch (although as a desktop machine its probably not going to be moved around much).  It comes with a VESA mount to attach it to the back of the monitor.

It's a sweet little machine.

Just one note, the ASUS page makes it sound like it also has built-in WIFI.  It doesn't.  It supports it if you add your own wifi card.
Specs: