There are two particular electronics devices that even decades later are still used and considered superior to any modern competitors: the IBM Model M keyboard and the HP Voyager line of calculators.  Fans of these devices loving hold on to these devices even after decades of active use and will only give them up if it's pried from their cold dead hands.  While nostalgia does play a role in generating love for "retro" devices (as we see with the release of retro style gaming console), what sets the IBM Model M keyboards and HP Voyager calculator is that these devices are just really good at what they do and their style and design are no longer being manufactured (well, at least no longer mass produced by the original manufacturer).

Do a search on Google and Youtube you'll easily find fan sites that will explain in glorious details what makes these devices so special.  I have an HP 15C and it is as great as what people say it is.  From build quality, legendary battery life (we're talking about the battery lasting years/decades, folks) to the "feel" of the keys as you type, this is a phenomenal calculator that I've come to appreciate a lot more now then when I first started to use it.

The HP Voyager calculators are more niche then the the IBM keyboards.  People still regularly use a keyboard while the use of a dedicated calculators are now mostly limited to academic and research settings.  Even when these devices were sold by HP, it wasn't sold at the scale which IBM's keyboard were sold at, but once you've convinced yourself on how awesome these calculators are the question is how to get one many hasn't been sold or made in decades.

However, I'm a software engineering by trade and it was not until after I started working (and long after its production run in 1989) that I discovered that HP had made a version for computer programmers:  the HP-16C.  Once I did find out about its existence, I dreamed about owning one, but the HP-16C is even rarer to find then the 15C and as much as I might desire one I'm not going to pay whatever the asking price is when it does make a rare appearance on the auction market. 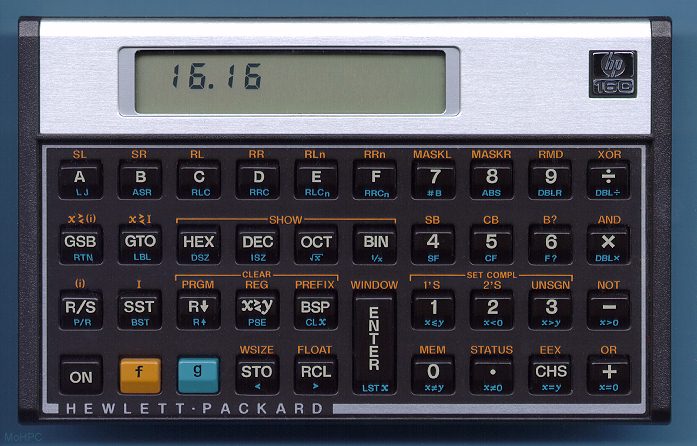 Then one day, I came across a company called Swiss Micros that was started by Michael Steinmann.  Apparently, Mr. Steinmann set out to clone the HP Voyager series and started to do so in 2011 with "mini" replicas that are about credit card size.  While these are cute, I wasn't too interested, but then Swiss Micros began to make full size replicas and that caught my attention.  Now I had a chance to experience a 16C directly so I ordered the Swiss Micros DM16L.

From its website, it's obvious that this is a small operation and it's selling a niche device, but the device shipped quickly.  It took awhile for it to actually reached me, but it arrived well packaged.  It doesn't use any fancy marketing box that modern devices tend to come in, but that's better for the environment!

My first impression was "wow, this thing feels solid".  These is a high quality RPN calculator for professionals.  I immediately tried out the keys and it had a very pleasurable tactile feel to them.  On its own merits, it is a top tier calculator, but people are likely buying this because they want an "new" HP Voyager.  I feeling that it does capture the spirit of the Voyager but this isn't an exact clone (and not just the logo and name).

The feel of the keys aren't the same which is noticeable when used side-by-side, but if you haven't touched an original in years then my guess is that you'll find just as much satisfaction with the DM16.  The lettering on the key caps are printed on the keys rather then injected into the key itself.

The overall dimensions are nearly identical but the LCD screen is bigger, the fonts are larger and there are multiple fonts to chose from on the DM.  I find the Voyager font to be cleaner and easier to read but font style is subjective.

The DM manufacturing is not as polished (both figuratively and literally).  The titanium casing around the LCD display showed the machining line and felt rough and not polished like the Voyager.  I'm not sure if it is intentional to show the grain of the metal (which is more yellow than the silver on the Voyager) but I suspect it isn't.  The rest of the case is well manufactured and everything is put together solidly.

If you noticed that the LCD has some spots/specs stuck in it even when turned off you can put the calculator in direct sunlight for a few days and they will disappear (easier and faster then to send it back to Swiss Micro and getting an replacement).

Would I recommend the Swiss Micro calculators?  As a quality RPN calculator, the answer is "Yes", but for most people it might be an overkill and pricey.  These aren't the calculator you want to just pick up and throw into the kitchen utility drawer.  For fans of the HP Voyager, fans of RPN calculators, and professional looking for a dedicated calculators then this is a solid piece of equipment to add to your toolkit.