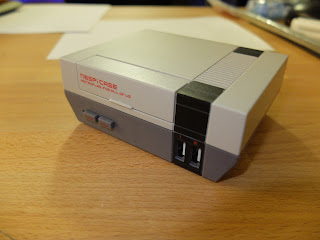 When Nintendo announced the NES Classic it brought back memories of playing games like Duck Hunt and Punch Out!  This year, Nintendo announced the SNES Classic and although they promised more availability I wasn't as interested given that I mostly played Atari then NES and then skipped to the Playstation.  I don't have as much nostalgia for the SNES, but its announcement again brought up a desire to play some of the old NES games.  I decided that I'll set up my own retro gaming console.

I already had a Raspberry Pi 3 that wasn't being used so I decided that I'll install RetroPi on it and make my own NES Classic.  The setup is extremely simple and it took me about 20 minutes before I was connected to a TV through HDMI and booted it up.  It's basically download the RetroPi image, write it to the micro SD card and insert it into the Pi.

For the controller, I used a PS3 controller that I already had so it didn't cost me anything to start playing Punch Out and other classic NES games.   The RetroPi and Rapsberry Pi 3 can emulate more then just the NES.  I'm using it for Atari 2600 games, SNES and Playstation games.  They all run very smoothly so if you can't wait for the Final Fantasy 7 remake to get here, you can relive all of its original goodness on the RetroPi.

After playing it for a bit, I purchased the NESPi Case for the aesthetic and also the being able power/reboot without unplugging/plugging the power cable.  This is a very nice case that looks like a mini version of the original NES.  I don't know how it compares to the NES Classic but my inspection of the case is that the quality is very good and looks just like the NES.  The price of this case tend to fluctuate but expect it to be about $20 to $25.

So how much does it cost to build your own from scratch?