My first PS4 game is Nier:Automata, the sequel to the 2010 PS3/Xbox360 video game Nier.  Nier is a spin-off from the Drakengard series, but I'm going to leave the explanation of the series to more qualified and dedicated Drakengard historians.  After playing it over the final week of 2017 and completing the first run-through, here are my first impressions. 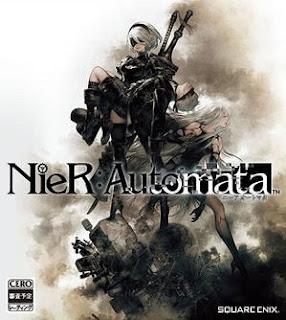 The lore from this game is immense and complicated as this 27 minute Youtube video reveals.

It's not necessary to know all of the background to play Automata although I found myself drawn to learn more about the history.

Nier:Automata is a beautiful and stylish game full of action and mystery.  The fights themselves are wonderful to watch and are very dramatic.  The character design really stand out as evident as the huge amount of cosplayers and fan art that surfaced this year.  I wasn't following video games at the time Nier:Automata came out, but I saw pictures of 2B appearing everywhere which led me to look up with it was all about.

By the time I got the game, I expected an action pack hack-n-slash action RPG and it didn't disappoint.  I expected beautiful graphics and it didn't disappoint.  What I didn't expect was the soundtrack and how wonderful it was.  I haven't enjoyed a game soundtrack like this since FFX.  It adds in a significant way to the magic of the world that visuals along can't do.

The pacing of the game can go very quickly and I found myself getting to the end of the first run-through (this game have you go through the story 3 times each as a different character) slightly under-leveled as I was eager to see the story line progress.  I was still able to complete the run-through and this style of gaming suits me well as I like to get through the game first and then go back and play it in more detail if I really enjoy the game.

This isn't a game to play in front of kids.  While most of the fighting will seem to just be the main character beating up robots protagonists there are some graphical scenes that is probably not appropriate for the little ones.  It can also be said that if they are paying attention to the story and understand the context then the killing that is happening on screen are not so black-and-white as good vs evil.

I'm loving Nier:Automata and would recommend adding to your PS4 gaming library.