I'll admit that historically I've not followed Nintendo and their games.  I owned an NES as a child but then didn't get another Nintendo system until the Gameboy Advanced.  Basically, while I've played the occasional Mario Kart at friends' house, I'm fairly lukewarm when it comes to Nintendo titles.

However, I started Super Mario Odyssey over the holidays and found myself enjoying it a lot more then I expected. 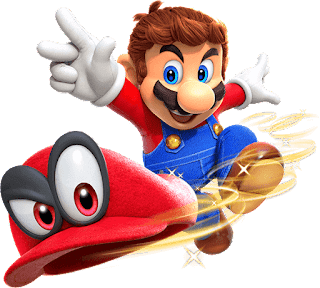 Odyssey is the latest (2017) Mario 3D platformer for the Nintendo Switch.  Once again, Mario needs to save Princess Peach from the clutches of Bowser.  The game is pretty open-ended and allows for a lot of exploration but the game can be played through without trying to accomplish every tasks.  For beginners, there is an Assist mode that will show you the way to progress through the game, prevent you from dying by falling over an edge and lets you regenerate health when resting.

While having this mode is great especially if you want to avoid having younger players get frustrated, most people, including kids, will do just fine in normal mode.  My son was able to finish the game in normal mode and this was his first platformer (besides Cuphead which he quit after a few tries).

If you own the Nintendo Switch then this game should be part of your library.  Not only can you enjoy it, but kids will as well.